As part of my continuing series of spotlighting fellow authors, this month I'll be interviewing Zeta Lordes.

Zeta is currently working on a Sci-Fi novella that follows the adventures of a team of Galactic Peacekeepers. The first in a planned series of books, it will follow the efforts of a cadet trying to qualify for field duty, despite the odds being stacked against her. Like many authors before her, Zeta has written a world with endless possibilities, and is planning multiple works within the same fictional universe.

Let's get started now, shall we? Zeta, do you ever model your story characters on real life people?

Zeta: Not consciously, no. Of course all characters are a compilation of real life people, but I don’t think of people in terms of… “gosh they would make a fascinating character to write about”. My characters are strictly the stuff of imaginings.

Do you strive for diversity in your characters?

Zeta: Absolutely. With the caveat that diversity can mean many things both in and out of socioeconomic parameters. Since I mostly write Speculative Fiction, I have a lot of opportunities to write outside stereotype considerations and address diversity from different perspectives. I love messing with how people perceive the lines between differences and likenesses.

What are your favorite types of female characters to write?

Zeta: I almost exclusively write autonomous female characters. Whether they start from a position of strength or weakness, their stories are about their choices and the consequences of those choices. Even when outside forces pummel them beyond endurance (I try to do that a lot), it’s their choice how they live with that. Of course, I often use their own flaws, and even their strengths, against them but ultimately I want to expose the strength and resiliency of character… male or female.

What are your favorite types of male characters to write?

Zeta: I confess I love the Alpha type males to both read and write. No shrinking violets for me. Of course, they have to be true Alphas who deserve and give respect in appropriate proportions and situations. I recently read a book by James Scott Bell called Manliness: The Robert Mitchum Way. It was a fascinating study of the Alpha male. Sometimes a little dated, but never in areas that really count. Like my female characters, I want my male characters to come out at the end a better, wiser [fictional] person than when they started.

Last question! Is there anything you’d like to add about character writing?

Zeta: I think characters are probably the most difficult, and satisfying, aspect of storytelling from both a writing and reading perspective. That includes both protagonists and antagonists. Crawling into a stranger’s head and telling their story in a memorable way, is both liberating and limiting. Obviously it’s more work with primary characters, but I try to make nearly every character shine through in some way. It’s a complex balancing act. Ultimately it’ll be up to the reader how well I do. 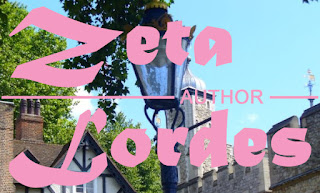 Zeta Lordes is an author of Science Fiction and Paranormal Fantasy flavored with plenty of suspense and romance.  When she’s not writing, she’s often playing with photo projects, including book covers for herself and other author friends. She lives alone in a rambling house littered with three generations of passed down books and three cats—who have their own litter.