In continuing with my spotlight of fellow authors, this month I'm interviewing Heather Hayden.

Heather writes Sci-Fi and Fantasy for the Young Adult age group. She loves action, and has a penchant for the unexpected. In recent months, she's been working on Of Beauty Within, which is a novelized, gender-swapped retelling of Beauty and the Beast. Her debut novel, Augment, was independently published, and mixes elements of both science and science fiction, while exploring themes of friendship and what it means to be human.

Let's open with something simple. When did you decide to become a writer?

Heather: I’ve been dabbling in writing for as long as I can remember. I finished my first novel in 2007, thanks to the challenge of National Novel Writing Month, and after that, I just kept writing. I did NaNoWriMo every year, JanNoWriMo for as long as the forums existed, and other writing challenges. I’ve won prizes in local contests for flash fiction and poetry, as well. I think I always planned on writing as a hobby, but after a few years at college, trying this, that, and the other thing, I realized that writing was really what I wanted to do. That’s when I decided to pursue it as a career.

I see. Are you currently writing full-time or part-time?

Heather: A bit of both, really. My current job is online and part-time, so I try to write whenever I’m not working. Eventually I’d like writing to be my full-time job.

That's a wonderful aspiration. Do you have a favourite motivational phrase to keep yourself on track?

Heather: I have several phrases I love, but I think in terms of motivation, CJ Cherryh takes the cake. She said: “It is perfectly okay to write garbage - as long as you edit brilliantly.” This strikes a deep chord in me, because as a pantser, my first drafts are often in need of help . . . which they get during the editing process.

I know you've published one novel already. What made you choose to pursue independent publishing?

Heather: I wanted more control, so publishing independently made the most sense. Plus, with hard work and a bit of elbow grease, it’s a lot faster to self-publish books than to seek representation. I plan on releasing two-to-four books a year, and having the control over prices, book covers, etc., is important to me.

Very insightful. Okay, last thing: it’s November! Are you participating again in National Novel Writing Month this year, and, if so, what's been your experience with it?

Heather: Yes! NaNoWriMo is actually what first got me writing novels. I started participating in 2007 after reading a magazine article about the challenge and finished with a 60,000 word novel about a mute girl and cats who lived in shadows. After that, I kept writing and didn’t look back. I’ve been participating every year since then. Some years were more difficult than others—during high school, I had a lot more free time (yay for homeschooling!), while during college I had to make time for my writing among everything else. Thankfully, my college had a trimester system and the first trimester ended mid-November—often my novel would get written during the last two weeks! 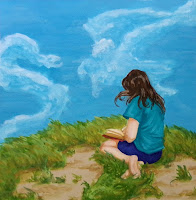 Though a part-time editor by day, Heather Hayden's not-so-secret identity is that of a writer—at night she pours heart and soul into science fiction and fantasy novels. In March 2015 she published her first novella, Augment, a YA science fiction story filled with excitement, danger, and the strength of friendship. She immediately began work on its sequel, Upgrade, which continues the adventures of Viki, a girl who loves to run, and her friend Halle, an AI. You can learn more about Heather and her stories through her blog and her Twitter, both of which consist of equal amounts of writerly things and random stuff she’s interested in.
Posted by Ash Litton at 12:00 PM No comments:

You'll have noticed I've not mentioned hide nor hair of NaNoWriMo 2016. That's because I chose not to participate this year. I have so many projects that need to be completed (especially Cabover Cabaret, which needs to be ready for its TBA February 2017 release date), that I decided this November would be about housekeeping.

In a way, I suppose you could say that I am participating in NaNo since I'm working on all projects, large and small, that need completed, but I'm doing so without the goal of 50,000 words of new material. I'm two chapters and an epilogue away from finishing Comedy of Rain. I'm working on the cover art for Cabover Cabaret, as well as final edits. I'm so excited to debut that cover art, too, as I'm having a lot of fun with it.

Back to Comedy of Rain, though. The writing may still be slow going, but it's progressing. Especially now that I've found the song for Franklin's chapter.


I'm looking forward to having a completed manuscript "on my desk", hopefully by the end of November. Fingers crossed!
Posted by Ash Litton at 9:50 PM No comments: