There's nothing more exciting than getting back into the groove of things. Working on the revisions for Tragedy of Ice has made me appreciate the overall story even more.

Having worked on Comedy of Rain for NaNoWriMo, and seen my characters after a substantial time skip, I really appreciate their personal growth. Franklin is so utterly young in Tragedy of Ice, and has grown up so much by the beginning of Comedy of Rain; Kadiza's gone from being closed off to others, and has built quite the support group for herself by book 2; Hipólito's no longer the aloof outsider, having been given his own POV, so we finally know what's in his head and how he sees the others.

It's just amazing watching them grow. My characters really are my children, and I put them through so much. And they are the better for it, believe me.

I also realized that Tragedy of Ice and Comedy of Rain are substantially different, in terms of the type of action, but that's a good thing. Tragedy of Ice is very physical, from the conflicts to the trauma. Comedy of Rain is psychological, with lots of mental abuse to go around. Yeah, there are still some physical altercations, but the cerebral mindscrew of a rabbit hole gets deeper and darker with the changes ISA makes in book 2.

At first, this had me worried, because the two books are so drastically different in terms of content when I compare them side by side. But the more I go back and forth between them, plotting and planning future scenes and arranging connections from the first book to the second, I understand how wonderful this turn is. The books have to stand on their own—that's a given—but they need to approach the same major plot point from different angles, without sacrificing quality.

I think if I had tried to shoehorn the plot of book 2 to match more with book 1, it would have ruined it. Readers would've gotten a rehash of Tragedy of Ice, just with a different cast and setting. I can't have that. The story has to evolve (naturally, organically), and while they say "history repeats itself", that can't happen with two works so closely aligned. They have to be different. The stories have to be different. Or else what's the point?

And as I continue to work on the two, I realize something else: I still need to come up with a sodding series name! lol
Posted by Ash Litton at 12:00 PM 1 comment:

Comeuppance has a cover!

I finished the cover for Comeuppance! I'm excited to say it's my absolute favourite to date. I love making the coverart as much as I do the actual stories. 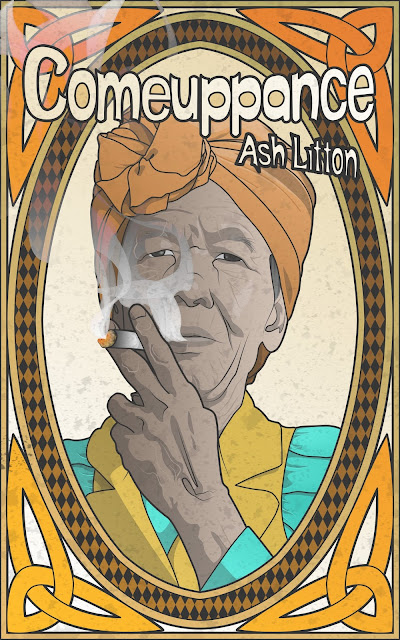 Speaking of the story. I'm on my (hopefully) final round of revisions, and will have the story out to my beta readers this week. If all goes according to plan, then I'll have the definitive publishing date to provide you folks with on my next update.