Now that Cabover Cabaret has been published, the new year is finally ahead of me. And that means getting back to the beast that is Comedy of Rain!


"Though the road's been rocky it sure feels good to me." ~ Bob Marley

When I last updated you, the little heathen had been evading my every attempt to complete its ending. Having had my mental break from it to handle Cabover Cabaret, I came to realize that part of my problem with Comedy of Rain was that I couldn't focus on its ending while stressing about all the NaNoWriMo word vomit I'd padded the opening chapters with. I'd rehashed the plot of Tragedy of Ice so much that Comedy of Rain wasn't standing on its own. 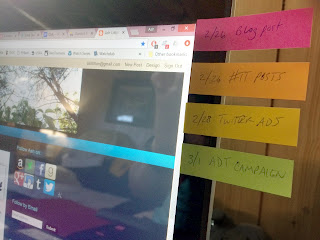 First order of business when picking it back up was to return to the beginning. Working with the presumption that folks reading Comedy of Rain will have read or reread Tragedy of Ice before starting it, I began stripping out any details for equipment, places, history, etc. that had already been thoroughly covered in the first book. For everything I pulled out, though, I took pains to flesh out concepts and plot points that are new and relevant to Comedy of Rain's plot line. Since I have the majority of book two written, I drew in issues that Kadiza and the others would be facing, and began laying a more solid foundation for them.

"Stop making excuses. [. . .] You’re old enough to make the decision to start over and rewrite your script. Nothing will change for you until you do.”

~ John Carlton, The Entrepreneur's Guide To Getting Your Shit Together

And then there was the other matter to attend to, the one of greatest importance. With everything I had already written, I knew Franklin and Hipólito's personal goals for Comedy of Rain, but I didn't have anything hardline for Kadiza. Which, to be blunt, was total horseshit considering she's the main character. I sat down with some writer friends, and I made bullet points for events and Kadiza's reaction (or lack thereof) to them, and eventually there was that "EUREKA!" moment where we figured out what her personal goal for Comedy of Rain was supposed to be.

Once that was settled, I began tackling Comedy of Rain in full force, shaping Kadiza's attitude and POV chapters around her personal goal, and I gotta say it's made quite the difference. Then to top it all off, I was doing an art party with two other artist/writer friends, and they gave me an epiphany for my ending.

Needless to say, I'm gung-ho toward the ending and chock-full of renewed enthusiasm for this book. If you've been following me on Twitter, then you know I've already made my way up through chapter 5. I'm striving to hit the full ending by the last week of March, so if you want to follow me, tweet exchange, and chit-chat about writings-in-progress, I'd love to hear from you!
Posted by Ash Litton at 3:00 PM