Greetings, everyone! Apologies for the lack of posting last month, but life got in the way and I wasn't able to get things posted like normal.
On the upside, today I'm bringing my last interview with HT Lyon, an author aspiring to write some near-future, hard science fiction based on technology rooted in contemporary science. His work focuses on creating as much realism as possible, so that means no FTL travel, artificial gravity, aliens, etc., but he does this with Economics as his foundation.

HT, thanks for joining me. First question: have you written works in collaboration with other writers, and if so: why did you decide to collaborate, and did it affect your sales?

HT: I have done a few collaborations for fun and it is incredibly rewarding. The main thing is to build a lot of trust early and spend time working out what each of you is good at!

Here's how they played out. In the first attempt, I was the person writing the first draft and the other person edited and embellished. We worked to our strengths and were happy with the result. The second attempt had me come in and embellish a piece already started by the other author. Finally, the other mechanism that worked well for for myself and my writing partner was to take a character each and write interlocking scenes. This required huge trust that we wouldn't try and force each other's characters into corners or constrain them. It was quick and a lot of fun indeed!

Sounds like it! Do you think that giving books away free works, and why?

HT: I think it does work and I will do it. Free samples have always been a great way to promote a product or service and books as a form of entertainment are no different. The list revenue is simply another way to fund a marketing exercise. Admittedly it works best in certain circumstances, specifically if you have a series or if it's used to have people signe up for a mailing list. There are millions of customers out there so a few free giveaways is very unlikely to hurt, especially if it does something useful like building a base of fans who have grown to like the author.

I think we're in agreement there. Do you have a soundtrack you write to? If so, how does this affect your prose?

HT: I don't have a single soundtrack. I do have soundtracks for some of my ideas. I listen to the soundtrack at the gym as I plot the novel and the good thing is that playing the soundtrack helps with recall later. It's like a little like a mental notebook.

What do your fans mean to you?

HT: I would love to have fans, people who liked my work. I really aren't interested in telling people what to think but I do care that people think for themselves. I would love to think of my fans as people who looked forward to my stories because of the way they made them re-examine their assumptions of the world. Also, if an indie author (or any author) is going to make a serious attempt at writing, then they need a fan base.
Last one, promise. Where is your favorite place to write?

HT: Anywhere I can get it done actually, but my most productive place is at home. Unfortunately, depending on what's going on in my life at the time, it can also be the least productive. Lunchtime is another favourite. Crank out an hour of draft over lunch works well. You need to find a quiet spot to sit, though. It really needs alone time. 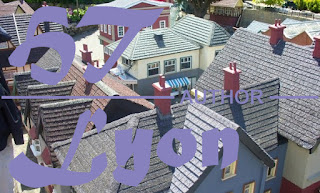 HT Lyon is an aspiring writer of science fiction. A futurist with a keen interest in where our society is heading, he tends focus most of his attention on stories that examine the direction our society is taking, or that shows where we could end up. Optimistic by nature, he believes that one day we will look to settle the Solar System as we outgrow our planet, and some of his stories examine how this could look.

Currently, HT has a number of novels underway and some short stories. His aim is to get one of these up and published before the end of the year around the other commitments that exist in his life.