In continuing with my spotlight of fellow authors, this month I'm interviewing Alasdair Shaw.

Alasdair is the author of The Two Democracies: Revolution science fiction series, which starts with Independence, and continues with Liberty. The third story, Equality, will hopefully be released in summer 2017, followed by Fraternity the year after.
Give us an insight into your main character. What does he/she do that is so special? 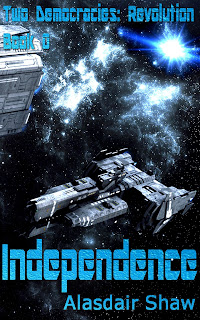 One is Indie, the primary AI personality of the ship The Indescribable Joy of Destruction. He is the first known sentient AI, something of a taboo in the existing society. He was accidentally liberated by the other main character, Commander Olivia Johnson. She is an inspiring officer, despite having battled depression since she was a young girl. Even though they come from opposing sides in a generations-long civil war, they become close friends, helping each other overcome their inner daemons.
If you could place Indie in any other fictional world, which would he most enjoy?
Alasdair: Most certainly the Culture. The respect given to the Minds, and the rights afforded to all artificial intelligences, would make him very happy. I see him working towards establishing just such a society in the future.
What drew you to write in this genre?
Alasdair: I have always enjoyed reading science fiction, especially space opera and military SF. As a physicist, I find describing the technology entertaining. As an Army Reserve officer, I am intrigued by the possibilities of future combat. 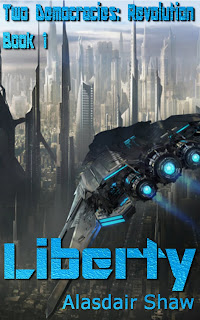 Do you have any advice for other authors on how to market their books?

Alasdair: By and large, you get what you pay for. Returns tend to scale disproportionately, so a small increase in cost frequently relates to a large increase in effectiveness. There are some effective free or $5 promos, but they are few and far between.
Make good use of your KDP countdown deals. If you are writing a series, there is an added bonus of sell-through to your paid books when you put your first one on free.
Even if trad publishing, you should market your book. One author I heard recommended spending your whole first advance on advertising. Your publisher is more likely to throw their A-game advertising at it if they see it selling well.
Finally, take part in multi-author cross promo opportunities. These can range from discounted book listings (like Patty Jansen’s Science Fiction and Fantasy Promotions) to anthologies and boxed sets (like The Newcomer collection of science fiction short stories that I just edited).
What is your guilty pleasure?
Alasdair: Butter. I never really had much of an affection for it until I became lactose intolerant. Now, lactose-free butter is heaven. Lashings of it on granary baguette, or on whole-grain crackers – divine. 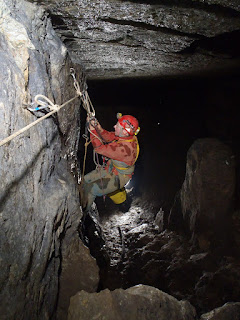 Alasdair Shaw grew up in Lancashire, within easy reach of the Yorkshire Dales, Pennines, Lake District and Snowdonia. After stints living in Cambridge, North Wales, and the Cotswolds, he has lived in Somerset since 2002.
He has been rock climbing, mountaineering, caving, kayaking and skiing as long as he can remember. Growing up, he spent most of his spare time in the hills. Recently he has been practicing his skills ready for the winter climbing season.
Alasdair studied at the University of Cambridge, leaving in 2000 with an MA in Natural Sciences and an MSci in Experimental and Theoretical Physics. He went on to earn a PGCE, specialising in Science and Physics, from the University of Bangor.
You can sign up to Alasdair Shaw’s mailing list at https://app.mailerlite.com/webforms/landing/k9x9t2  and see what else he gets up to on his website.
The Two Democracies universe intersects with our own at Twitter and Facebook.
Posted by Ash Litton at 12:00 PM