Welcome to the second installment of my author spotlight series. This month, I'm interviewing Jim Moran, a Sci-Fi writer who's currently working on an epic space opera.

When did you decide to become a writer?

Jim: Heh. I don’t think I’ve really “decided” that. Or, maybe I’ve always been a writer. I don’t know. I write a lot, but not professionally as of yet. Have I decided to pursue a professional career as an author? Maybe that’s the better question, but if it is, then I don’t have a good answer for it yet.

Life is a grand adventure, right? I’m still just making things up as I go, for the most part. Ask me again in a year.

What do you think is the hardest thing about writing?

Jim: For me, it’s everything not directly related to the writing.

I think I’ve found a workable approach to writing. I don’t have much of a problem coming up with ideas, building a workable framework around those ideas, writing, revising . . . all that stuff, I’m fairly comfortable with my efforts and abilities.

But once I have a finished product, ask me what I’m going to do with it, and holy smokes I have no idea. A couple of years ago, this wasn’t even a thing that had anything to do with me. Now people are asking me stuff like “Are you going to get an agent?” and “What do you think about self-publishing” and “What do you think about the Hugo Awards?” and “What’s your query look like?” and I have no idea.

Okay, I have a few ideas. But “a few ideas” is about as far as I’ve gotten. My whole writing endeavor started on a whim, and things have basically been stumbling along towards progress ever since.

I feel like I’ve just baked a birthday cake for a three-year old’s birthday party, in a calm and peaceful kitchen, and I’m quietly pleased (and a little surprised) by the results. Meanwhile, there’s this muffled background murmur that has been present the whole time, but it’s in the distance. It doesn’t affect me right now. Right now, it’s just me and this cake I made.

But the cake isn’t for me, it’s for everybody. So I open the kitchen door and AAAAAAAAAH! AAAAAAAAAAAAAAH! AAAAAAAAAAAAAAAAAAH! Now I’m being mobbed by a bunch of wildlings. Some of them want the cake, others think the cake looks gross and immediately want me to bake a different cake, and both groups are shouting. Some of them just want different icing on the cake, as if that’s a reasonable request. Some are grabbing for the cake without asking. One of them punched one of the other ones, and they’re both crying. Somebody isn’t wearing pants. Somebody else is trying to hang on my leg with every step I take. Everybody’s running around and screaming and carrying on and it’s chaos. Chaos.

But yeah. The writing, I don’t have a problem with it. Everything else, on the other hand . . .

Did you come across any specific challenges in writing Focus?  What would you do differently the next time?

Jim: I would spend more time, earlier, thinking about how I wanted my characters to progress. When I first started knocking words together, most of my major characters had a bit of personality but no growth. Some of that growth I backfilled, some of it I shoehorned in later, but I didn’t really get a good handle on where I wanted these characters to be until I was about two-thirds of the way through. Then I had to go back and rewrite a bunch of stuff. It was a decent amount of work that could have been avoided had I been thinking about it from the start.

With respect to your writing career thus far, would you have done anything differently?

Jim: It’s not really a “career” thing for me, at least not at this time. And I really have no significant regrets as to where I am now. But if I were to change something, it would be to get started earlier. Like, at least a decade earlier.

My writing wouldn’t have started out nearly as well (relative to where it is now, anyway) but I’d understand the industry a lot more and I’d be more comfortable and experienced dealing with a lot of the extracurriculars.  Who knows where I’d be today?  Still a programmer, probably, because my day job is a fulfilling endeavor that I enjoy. But, writing-wise, I’d certainly be better prepared for whatever the next step should be.

Final question: which famous person, living or dead would you like to meet and why?

Jim: Any number of folks, really. Right off the top of my head, the first name I can think of is Theodore Roosevelt.  I would buy that man a drink. He’s gotta have all kinds of interesting stories to tell. 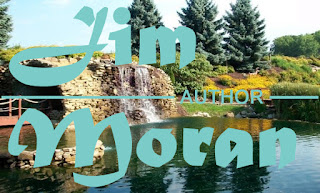 Jim is a random guy on the Internet who accidentally fell into this whole "writing" thing. He is terribly inexperienced in virtually every aspect of the writing endeavor, and is currently just making things up as he goes. What fun! He has a blog.
Posted by Ash Litton at 12:00 PM