Today's a day for me. It is, in fact, my last day at my current job, and like closing one book and opening another, I'm about to settle in for a huge shift. I expect different job duties, different routines, different management styles. But I also expect the same character: me.

I'll grow, I'll change, I'll adapt, but I'll also retain the qualities that make me "me", while taking on new ones that will further define and mature me. As any well-rounded character should. 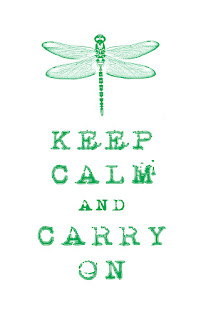 Tragedy of Ice started with Kadiza in her comfort zone, ripped her out of it, and threw her into a new place by the end of the book. Comedy of Rain sees her begin in her new comfort zone, and I noticed that she's brought that experience and growth from the first book and applied it to her responses in a "been there, done that" sort of way.

At least, that's how it starts out.

I have to keep throwing Kadiza curve balls so she has new things to learn, and more difficult obstacles to face than the dissenters from the first novel. Right now, it takes her much longer to start tripping up, and while originally I thought that that was poor characterization, my transition between jobs gave me new insight: Kadiza's got experience now, and it's going to take something really drastic to pull her out of her comfort zone. She's "Keeping Cool and Carrying On", so to speak, until that one thing hits her mid-book that takes her for a loop, that one thing that makes her have to stop and recollect.

And what makes me exceedingly happy about this now is that she has to turn to others because she's so far out of her depth that she can't handle it on her own. It makes her stronger as a character, because she realizes the value in asking for help. And that's completely—no, perfectly okay.


So like Kadiza, I'm going to "Keep Calm and Carry On" tomorrow at the new job until something hits me, and when it does, I'll know it's okay to ask for help. Because Kadiza said so, and I always listen to the voices in my head.
Posted by Ash Litton at 8:06 PM