"The Faraday Cage": Behind the scenes of a launch party

I know: I'm late. Camp NaNoWriMo has mostly given me back my soul (I still have the last several chapters and epilogue of Comedy of Rain to complete), but I will be back on my every-15-days posting schedule now.

I had the wonderful opportunity recently to participate in an online launch party as host, and with the authors' permission, I'd like to talk about our behind-the-scenes preparation and experience.

My good friend, Virginia Marybury, asked me two months ago if I would be willing to host the Facebook launch party for The Faraday Cage anthology, which she had been asked to write for by author/editor Steve Turnbull.

I'll admit: I was nervous. I'm glad I was asked two months ahead of time, because it took me the better part of a month to build up my courage. I was being asked to host someone else's launch party. Something I had never done before. No easy feat when I'd only participated in a single previous launch party, and that was as a member of the audience.

But I'm glad I decided to accept the challenge of hosting. It was a wonderful experience, and Steve and the others were great to work with.

We led up to the event with an "exponential growth" of communication, and since we had over a month to plan (and also because I was intensely focused on Camp NaNo), Steve and I played a bit of Facebook tag, sharing pre-planning ideas.

One thing I want to make clear here: I was completely open and honest with Steve from the get-go about my lack of experience with hosting such an event, and he assured me right back that we'd all be in it together because none of them had been on the host side of a launch party before, either. That openness made for a great behind-the-scenes development team, as everyone was involved in preparing for the launch.

Steve set up a private organization group on Facebook for myself and the authors, and as we got closer to the event and everyone had a better idea for their schedules, we made preparations accordingly. Katy O'Dowd knew for certain that she wouldn't be available for the launch, so she scripted some Q&As for us to have on hand in her stead. I'm so grateful she did this, as it made us think to have the other authors script Q&As, too (turns out we needed it, as three of the five were unable to make the launch in the end, so "Yay!" for building a script).

Now, before I ever got involved, Steve and the others had everything for their anthology worked out – including a magnificent piece of cover art for the book, as well as custom interior black and whites for each author's story. Those black and whites came in handy: since I wanted to take the time to spotlight each author, I was able to make those spotlights more visible during the event by having each paired with its applicable artwork. Add to it that the Q&As were posted for each particular author under their spotlight, and we were able to keep the event posts condensed, clean cut, and organized.

Something I did once we had everything collected for the trivia, spotlights (story title, author, short-form blurb, and 1-sentence author bio), and Q&As was put it all together in a timetable. I composed an event kickoff note, then staggered events on my timeline by 5-minute increments. Including two reminders about how trivia winners would be announced and what prizes were available, I was only able to cover an hour and a half of our two-hour event. But that was okay. The last 30 minutes gave us a buffer window in case we got busy or had hiccups (miraculously, no real hiccups aside from Facebook switching Steve and me back to our private account names instead of our author accounts a couple of times), and with the way we got busy, that 1.5-hour schedule stretched the entirety of our party. Steve then, of course, closed us out with Thank Yous and winner announcements.

Oh, and before I forget: about 15 minutes prior to kickoff, we shared the event page to several large Indie Author groups on Facebook to maximize exposure. There were several participants who none of us recognized, and I can only attribute them to those Indie Author groups. Not bad for what was a last-minute decision in the hour leading up to launch!

If all of that seems disorganized, then rightfully so. We were flying by the seat of our pants with limited experience, but we pulled it off through great communication via a behind-the-scenes group chat so that we could navigate in real time what we were posting next. As such, I'd like to now streamline this for the bullet-point folks who would prefer to see our practice put into a practical model form:

Month prior to Launch:

Week prior to Launch:

Now, as to what the timetable actually looked like, I'll do a condensed version (without the individual blurbs, bios, Q&As, etc.):

The actual Google Docs version was 7 pages long, and—like I said earlier—while I'd only scripted 1.5 hours of the event, we were down to the wire posting everything and we didn't even get to use all the trivia/games that we'd planned for. I did find myself having to skip about a bit (what with double-posting games/trivia at the same time as author spotlights), so the best thing for me to stay organized was to highlight each item as we completed it.

So after all of the planning and the two-hour adrenaline rush to keep up with everything, I've asked myself: would I do this again?

Absolutely. Steve and the others were great to work with and happily involved, wanting to see their project soar like an airship (yes, you saw what I did there ^_~). They knew what they wanted, I knew what I wanted, and we met in the middle like perfectly aligned puzzle pieces. With the right chemistry, I would love to work with other authors to help support them for their online book launches. 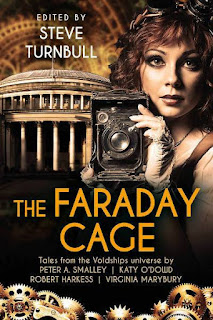 I loved every bit of working with Steve, Virginia, Peter, Katy, and Robert. I hope you folks will take the time now to wander over to their author pages, give them a like, and check out their collaborative Steampunk anthology, The Faraday Cage, which is now available on Amazon in hardback, paperback, and ebook (free for KindleUnlimited users).

Whew. Okay. Not to keep you folks any longer, but I hope this more than makes up for me being late after Camp NaNo. See you in 15 days! :D
Posted by Ash Litton at 12:15 PM